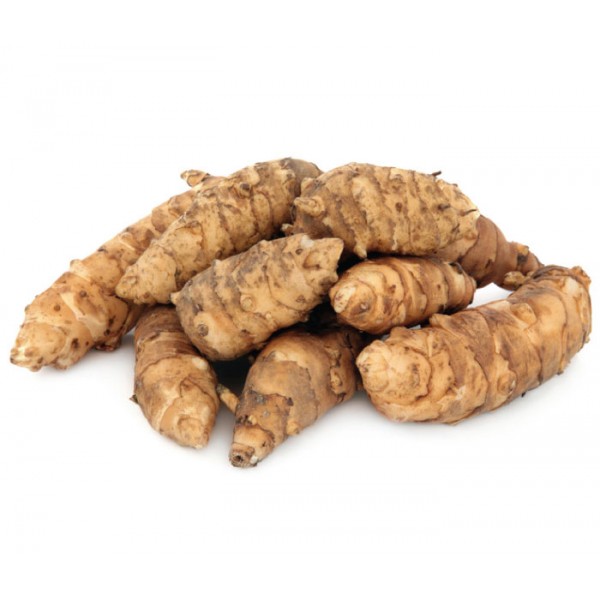 This vegetable (also known as a sunchoke) is not truly an artichoke, but a variety of sunflower with a lumpy, brown-skinned tuber that often resembles a ginger root. Contrary to what the name implies, this vegetable has nothing to do with Jerusalem, but is derived instead from the Italian word for sunflower, 'girasole'. IT's white flesh is nutty, sweet an crunchy and is a good source of iron. The peeled or sliced artichoke flesh will discolour if exposed to air, so place in a bowl of acidulated water (cold water with a squeeze of lemon juice or a dash of vinegar) until ready to cook. They are knobbly and tricky to peel (easier to peel after boiling) but as the skin is edible, just give them a good scrub and don't bother peeling if you like.

- Jerusalem artichokes can be cooked in much the same way as potatoes or parsnips. So simply boil and mash or purée.

- Par boil then sauté with fennel and good olive oil for a delicious side dish.

- Roast alongside other vegetables to have as a side or to go into salads, tarts and so on.

Add to Favourites Compare this Product

Bananas, bunch of 5
Fresh Organic Bananas from Ecuador. Fairtrade when possible.Please note: Although we make every ef..
€2.79 Ex Tax: €2.79
Add to Cart
Add to Favourites
Compare this Product

Please register or login to your account to order.

Learn what you can do to help the planet one meal at a time AND GET 15% OFF AND FREE DELIVERY ON YOUR FIRST/NEXT TWO ORDERS.